Engadin is a valley in the canton Graubünden in Switzerland. This valley is very beautiful destination for skiing, hiking and even sailing (during summer). Perhaps the most famous village in Engadin is St. Moritz, popular among Russians – during high season you can hear Russian language more often than any other.

I love this place, and I have visited it multiple times during different times of year – all of them proved to be worth it for me as for a not skiing person. It is possible to reach St. Moritz from Zurich in 3-3.5 hours by car or by train. For the car it is necessary to pay attention to the weather forecasts, as it depends on the weather if the mountain passes are open and can be used. Otherwise, the most reliable way is to take a train. For cars in winter I would highly recommend taking chains, so that you do not get stuck in snow and ice.

During winter, several lakes of Engadin usually get frozen, so you can enjoy skating right on a lake’s ice. Last time I was skating there, it was very strange and a bit scary because of the black ice – there was not much snow, and the ice was basically “naked”.

For those who are like me and do not ski, there is a lively golf club between Celerina and Samedan (two little villages). The view during the game is guaranteed to be breathtaking!

My special recommendation for cold months in Engadin is Mineralbad & Spa Samedan. It is a truly relaxing place, with baths of different temperatures, sauna and massages. During high skiing season, especially in the evenings, it is crowded there, but other rimes it is definitely worth a visit. You will get a towel as a part of the entrance fee, but it is also possible to get a bathrobe and even a separate changing room, that you will be locking with your own key.

Engadin has an interesting emblem that looks like this:

The valley is famous for its lakes and mountains, so this symbol represents actually both of them at the same time: the snowy mountains reflecting yellow sun and reflecting themselves in the blue lakes.

In 2017 I visited Engadin in a quite unusual time – the end of September. There were few tourists, almost no snow, but the sun was shining and the cable cars (funiculars) still working. Below you can see several photos that were made during this trip. 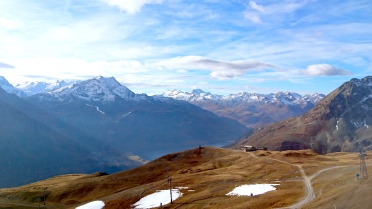